It’s a rite of passage. The Kindergarten play. This time, it was Thing 2’s turn. The production this year was the Three Little Pigs as an opera. 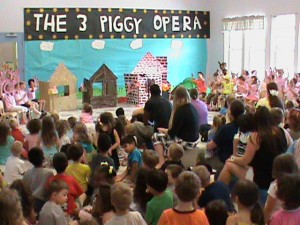 Thing 2 didn’t want to do any solo parts, so he chose to be one of the pigs in the background chorus. He performed well, but as you can see in this video, he looked like he was longing for more as he watches his friend The Wolf perform the starring role.

The kindergarten class does a repeat performance the next day, this time for the other kids in the pre-school with no parents there. I guess Thing 2 felt more comfortable because we received a call 45 minutes before showtime from the school, to let us know that the kid who played The Wolf didn’t come to school that day, and Thing 2 would be taking his place!

Well, of course we raced to the school to see it in person. If I hadn’t seen it with my own eyes, I never would have believed it. This was one of those proud parenting moments you don’t forget. And luckily I also had the video camera handy.

He entered in The Wolf costume, looking a little nervous but excited. He waited patiently for his time to come then he did his stuff. Finally, he takes a bow and walks off the stage with his leading ladies on his way to super stardom. Watch out Brad Pitt, here comes Thing 2.

2 thoughts on “The Understudy”