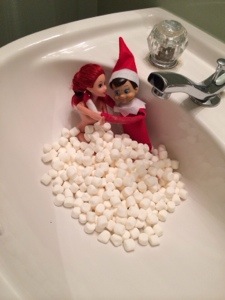 In Toy Story 3, there is an emotional scene where Andy decides to part with his childhood toys.

There was such emotion or sadness involved when I parted with some toys that have been with us for many years and have left an indelible mark on all of us.

For instance, there is the Thomas ride on train that makes train noises as soon as it moves. The slightest movement. Sometimes, it starts making noise on its own like it’s posessed. We’ve had that toy for at least 6 years and never once changed the batteries, and yet, the noise never stopped.

Then there is the tractor with seats for a duck, pig, car, and farmer. It starts playing Old Macdonald Had A Farm when all the animals are in the right slots. Or when the lights are turned off because it uses a light sensor. Again, the batteries have never been replaced, never run out. It’s possible I even removed the batteries and it still plays that song.

So, as you can see, there is no sadness on my face as I drove a car packed full of old toys to be donated to kids who need them, and their unsuspecting parents. 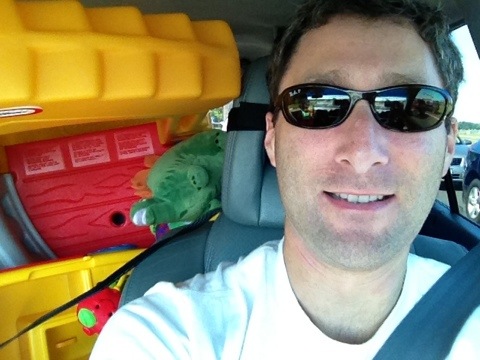 I got a glimpse of something today that I’m sure there will be a lot more of. It’s an inevitable part of kids growing up today with so much technology.

Thing 2 turned seven years old this week. He has been wanting a Nintendo DSi for a long time and finally got his wish.

Thing 1 has had his for a year. But only now, with two in the house, is he getting the full experience. He discovered something called Pictochat. It’s a chat room app that lets you write handwritten messages to other DSi’s in the vicinity.

Thing 1 and 2 were going back and forth writing silly messages. Then it kicked up a notch. Thing 1 gave a dare to his brother. He dared him to run to the basement. Naked. He wanted him to streak through the living room and kitchen areas.

I’m not sure which is worse. That Thing 1 dared his younger brother to do this. Or, that Thing 2 was fully prepared to do it until I put a quick end to it. I can’t wait to see what they’re like as teenagers.

Getting any almost 5 year old to stay focused and not be distracted is a challenge. With Thing 3 it’s impossible.

A seemingly simple request to go upstairs and put his pajamas on turns into an endless string of diversions. He is distracted by so many shiny objects along the way, by the time he gets upstairs he forgets why he went there in the first place.

Then he gets mad, because he can’t go in the basement, because his pajamas aren’t on, so he goes back upstairs and the cycle starts over. Meanwhile, his brothers had their pajamas on long ago and are playing in the basement.

Today I came up with a new approach. I call it the team approach. I said to Thing 2 and Thing 3, “You are a team. The team goes in the basement when the team has their pajamas on.”

I knew this would have no effect on Thing 3. He was already onto a new shiny object. But for Thing 2, this was the motivation I was looking for. He went upstairs with Thing 3, picked out his pajamas, and pushed on him to put them on.

Instead of being a new distraction for Thing 3 and getting silly with him, Thing 2 kept him focused. Thing 3 listened to his brother way better than he ever does with me. And I didn’t even need to be upstairs!

Why didn’t I think of this sooner? I am a genius. Wait a second. I’ve thought that before and it always backfires. There must be a flaw here but I’m not seeing it. 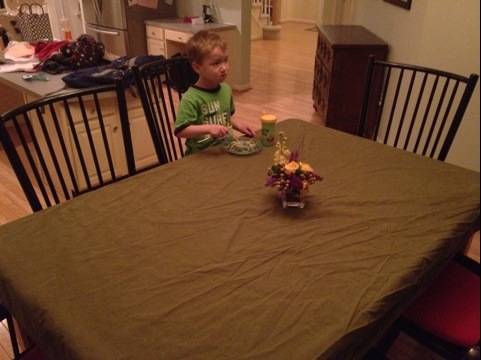 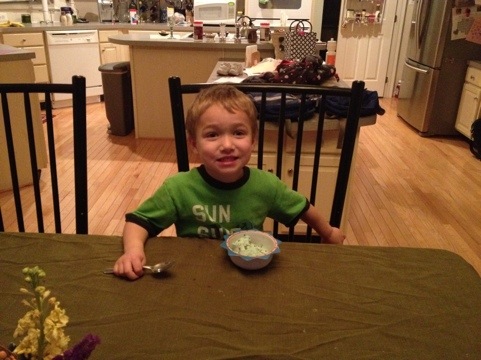 Often overlooked this time of year, when we are choosing gifts for our kids, is the amount of work required to assemble the gifts.

Last year it was the basketball hoop in the driveway which took 400 pounds of sand to fill the base. Yes, 400 lbs that I had to cart back from Home Depot in 50 lb bags. Then there was this debacle a couple years ago. And with the kids getting older the problem only seems to be growing.

This year I thought it would be good to get them a Foosball Table for Hanukah. But not just any table. I wanted to get one that would last many years, providing enjoyment all the way through high school. Did I mention I was a bit of a foosball aficionado back in the day?

I found a table on Amazon. It looked great in the picture and had good reviews. What I didn’t realize, until the guy delivered it on a packing crate, was that it weighed over 200lbs. And there was assembly required. 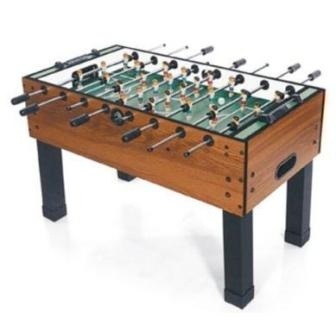 This is what it actually looks like after you manage to get the 200lb box down the basement stairs. 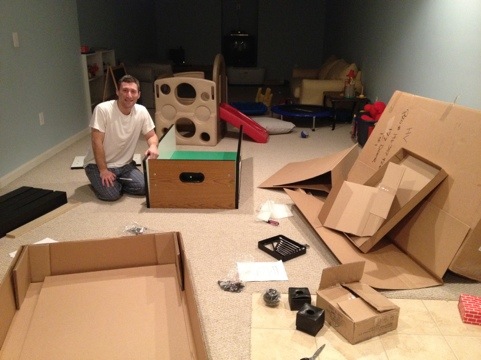 Four hours, 3 finger blisters, and a sore back later, we’re ready to unveil it tonight. Blisters are what happens when you don’t have the electric drill charged and you need to fasten dozens of wood screws by hand. I’m looking forward to the cute deluxe play kitchen I will be assembling on Christmas Eve. This time I will charge the drill ahead of time.

Time for another trip to the dentist with Thing 3.? Based on the pleasant surprise last time, I was kind of expecting it would be fine.? But when I consider his history of dentist visits, shoe shopping, and haircuts, I realize it was just wishful thinking.

He was already anxious, I knew he needed to go potty even though he refused, and coupled with the extra long wait we had in the waiting room, it was getting to be too much for Thing 3 so he decided he would leave.? He left the dentist’s office and slammed the door.? Then opened it.? Then slammed it.? Then opened it.? The office staff thought it was entertaining.? I was not amused.

In the examining room, he refused to get into the chair.? The kid who loves to watch movies didn’t want to pick a movie that he could watch on the ceiling while lying back in the chair.?? He wouldn’t let her floss or brush his teeth.? He finally agreed to sit in my lap while the dentist “counted” his teeth, which is his effective ploy to get a look in his mouth.? All along Thing 3 was saying how “horrible” everything was, and that he wanted to “punch everyone in the face” and “put them in the toilet”.? Luckily those last two were for my ears only before we got there.

Even with little he was able to see of his teeth, the dentist spotted some decay on his front tooth.? Maybe that’s because he is such a willing participant every night when it’s time to brush his teeth.? The dentist wanted him to take an x-ray.? You can imagine how well that went over.? A new room he didn’t want to go into.? A new chair he wouldn’t sit in.

Twenty minutes and a lot of coercing later we had the x-ray results.? There was a spot that would need to be filled either now or as a cavity later.? Considering he never was able to have the cleaning, we may as well do the filling and the cleaning all at once in a future visit where he will need to be sedated for about an hour while they work on him.

Sedation ought to be fun, especially considering his addiction to milk and the fact that he can’t have anything to eat or drink for 6 hours prior.? We’ll likely need to use sedation for all his dentist visits in the future.? And do you know what’s really fun about that?? The not covered by insurance $650 it costs each time.

As parents, we never want our children to suffer. We’ll do anything to help them. But there are times we just cannot help, no matter how much we want to. And it breaks our hearts to watch them struggle and suffer.

This weekend I was not able to help Thing 3 when he needed it, wanted it, and kept asking for my help. It pains me to relive it just by writing about it.

He was playing Super Mario Galaxy on Wii. He was at a new level that he couldn’t figure out how to get past. His usual sources of help in this area, Thing 1 and Thing 2, were not home. So it fell to me.

“Daddy, help me! Show me how to do this”

I tried, but couldn’t figure it out. He got upset. A four year old’s image of a father who knows and can fix everything, shattered, never to return.