Thing 3 got a new bed today.? It’s a full-size bed with a trundle underneath for future sleepovers.? He had been in a toddler bed for so long, although it’s not like he was actually sleeping in it.

We made mention of it a couple of times but didn’t make a big deal.? This is Thing 3 after all.? You give him casual notice of change, but do not dwell on it because he will resist the more you talk about it.? When I picked him up at preschool today I told him there was a surprise in his bedroom.? He was excited.

He didn’t get upset when he saw it.? I think he was actually liking it.? At bedtime, he was reluctant, but I lured him with the promise of a special bedtime story.? To my shock he got in the bed.? Under the covers.? And put his head on the pillow!? Those may sound like no big deal, but did you read this?

Here he is all tucked in. 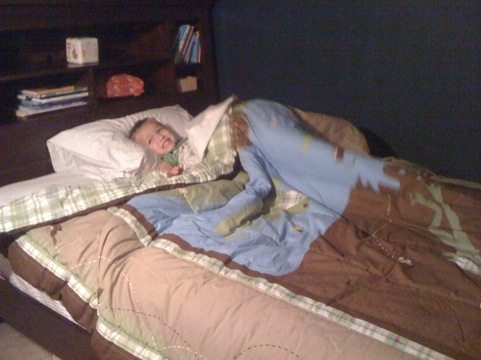 Adorable, right?? Except it lasted about 10 minutes.? Then he was out of bed as usual, complaining that his bed was “unsafe” and demanding that I “put it back the way it was!”? The last I saw he was lying horizontal across the bed, on top of the covers, with his feet on the wall.? We’ll see where he actually falls asleep tonight.

One thought on “A New Bed”