Watch a two year old for a while and you will see some disgusting stuff. This being my third time with a two year old, I thought I had seen it all and nothing could gross me out anymore. Never say never.

But not too many kids I’ve seen try to stick raisins up their nose. Not just stuck in there, but really shoved in as far as he can. So he needs to put a finger in there all the way to the knuckle and really work to find it and get it out.

Then, when he gets it out of his nose, he puts it into his mouth and eats it.

Just remember that one the next time you order a cinnamon raisin bagel or snack on some trail mix. I know I will from now on.

Two year olds are full of wonder. Ever curious, exploring, and most of all, touching. Thing 3 has a special ability, like most two year olds, whereby he will touch exactly those objects you least want him to.

What sort of objects does he like to touch? These days it’s animal poop. Yes, he has a possible future as a Pet Butler. Got Poop? We Scoop.

Last week at Cox Farms we were feeding the goats. Thing 3, who also loves to pick up rocks and mulch, was picking up goat poop to throw it.

Again, today, walking to feed the ducks. The path is loaded with goose droppings. If he isn’t stepping in it, then he is picking it up and throwing it.

And not to be outdone say hello to Super Thing! 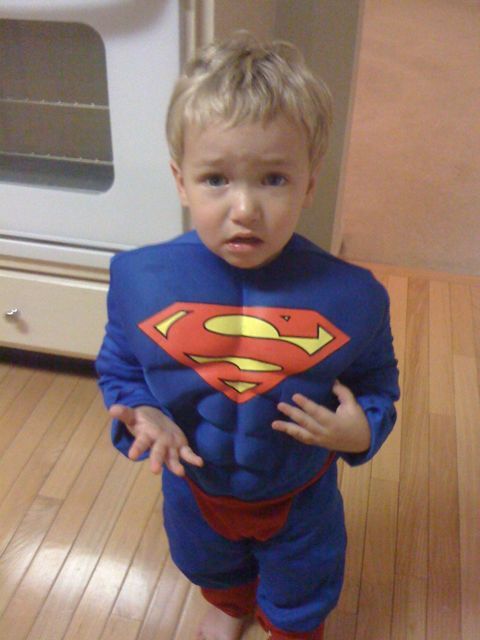 Toddlers are troublemakers curious by nature.?? They touch, push, pull, prod, and climb anything and everything in their path.? It’s how they learn about their world.

It’s also how trouble happens.? I’ve posted before about Thing 3’s curiosity, which even for a toddler, is extraordinarily high.? For a while he was very curious about the water in the toilets and only wanted to put his hands in it.

Having just moved to the two year olds room at daycare, his new teachers are just learning of the new level of curiosity that Thing 3 brings.? And these are teachers who spend all day with two year olds so I would think they’ve seen it all before.

One of Thing 3’s passions is running.? Fast.? Into the unknown.? Because he’s curious, I guess.? We try to give him an outlet for his running.? The mall is a great place for this.? Point him in a direction, put him down and he’s OFF.? Like a wind up race car.? Into the Banana Republic and behind a rack of clothes.? Oh yeah, once he finds a new place, he likes to hide from me.? I”ve lost him more than once in the aisles at Target or Michaels because he ran off to hide.

On day one of being in his new classroom, the teacher told me? Wow, he is fast.? I opened up the door to the class and he was halfway down the hall before I could get out the door.? Yeah, he’s like a puppy that can’t be let off the leash even indoors.

Then today I get a strange instant message from the teacher.? She wanted to know if Thing 3 has ever pulled or tried to pull a fire alarm.? Apparently he’s been working for days to stack objects in the classroom so he can climb them and pull the alarm.

Fortunately, it’s a first.? But given his curiosity level it’s very believable.? I just hope this is a phase and not an indicator of trouble to come.

You hear a lot about the terrible two’s. We are no doubt smack in the middle of this stage with Thing 3. But that is not what I’m writing about today.

Thing 3 is also a two year old terror. Who does he terrorize? His older brothers. Usually you hear about the older ones picking on the youngest. Not here.

Part of the terror comes from the normal toddler behavior of getting into his brothers stuff. They know a game of checkers, or playing a computer game is subject to instant termination when Thing 3 is around.

Then there is the physical intimidation. Yes, by a two year old. To him, about the funniest thing you can do is bop someone on the head and say “ow”. All fun and games with a pillow or stuffed animal. Not quite so funny when it’s a flashlight, fork, or other hard object.

He also likes to run full steam and dive on you. It’s fun when you see him coming. It hurts when you don’t. Either way he comes up laughing.

On so many occasions when the three of them are horsing around, it’s usually one of the older ones who come up crying at the hands of Thing 3.

They both flinch when Thing 3 makes a move in their direction. As a result, Thing 1 and Thing 2 have the reflexes and awareness of a secret service agent.

One night, Thing 2 woke up crying during the night. He was having a nightmare. I walked him back to his bed and asked what scared him. He said he dreamed that Thing 3 was chasing him with his flashlight.

Thing 3 loves water.? He likes to drink it, spill it, pour it, splash it, bubble it, and throw it.? He is really fascinated by water.? He would run his hands under the faucet all day if he could.

And, this weekend, we found out this kid is also a natural when it comes to swimming.? He is utterly fearless in the pool, which is both good and bad.? I’m happy he isn’t afraid but a little fear is actually a good thing.? It is what prevents him from running headfirst into a body of water.

At just two years old, Thing 3 has managed to figure out all by himself how to hold his breath and float on his belly.? Sure, he swallowed some water a few times.? But he just came up laughing and wanted to do it again.

Comfort objects are a curious stage. For a while it was a monkey stuffed animal, then a duck. I can understand being attached to those nice cuddly objects.

The last few weeks Thing 3 has become attached to a flashlight. He carries it around the house, takes it to school, keeps it with him when he eats, and takes it to bed.

Yes, the batteries will run out soon. Yes, this will cause Thing 3 to have a tantrum. No, I’m not going to keep putting in new batteries if he leaves it turned on 24/7. 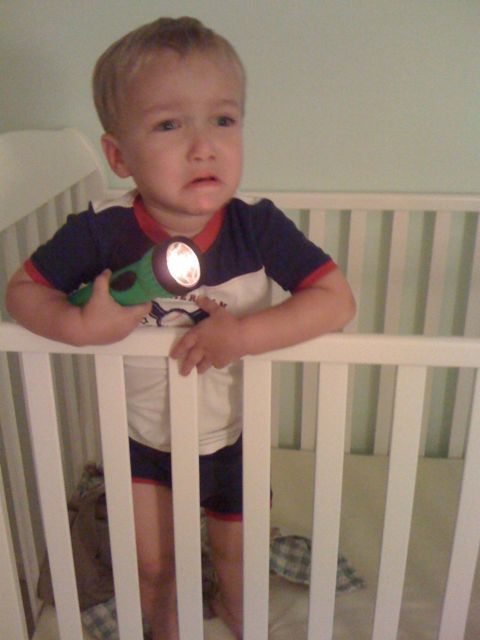 Yesterday we were at Port Discovery Children’s Museum in Baltimore. Here are some pics of Thing 3. He loved the water room and riding the “horse”. 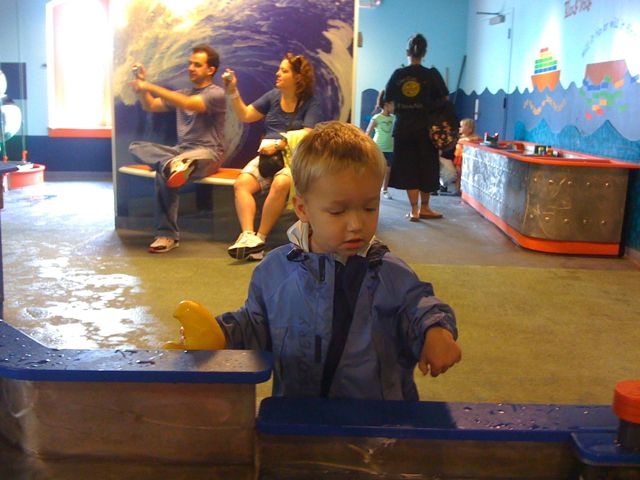 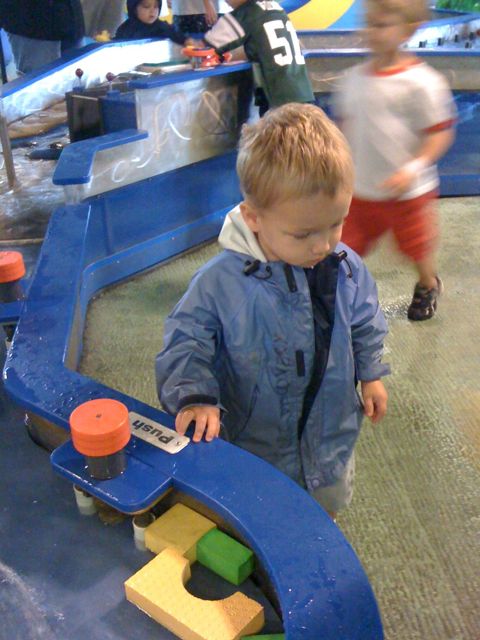 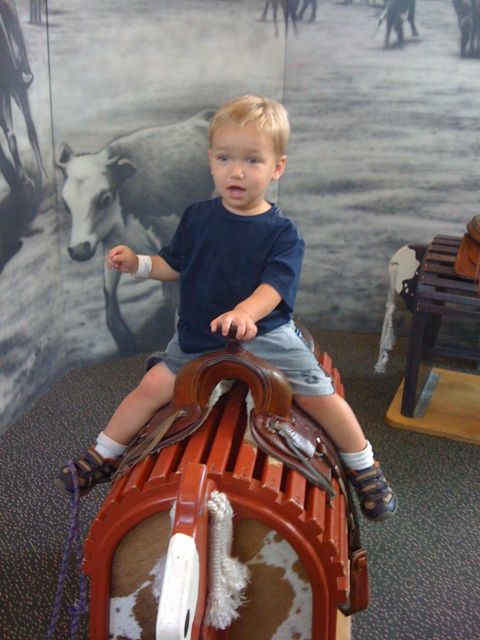