Thing 1 (The Greek) added to his winning streak last week, picking the Colts over the Broncos.? He predicted the score would be higher, but in terms of point spread he picked it exactly.? He said the Colts would win by 12 points and they did.? Most of the experts in Vegas can’t do that consistently. One or two times could be a fluke.? Three times in a row?? He has a gift.

Thing 2’s (The Swami) record drops to 1-2.? But mainly that’s because he will usually pick the opposite from his brother.? It could also be because he is 4 years old.

Our Week 15 game of the week is Cowboys vs. Saints.? The Saints are undefeated but each game is tougher to keep the perfect streak alive.? The Cowboys are known for losing in December and they are determined to not have the same fate this year.? This will not be an easy game to pick.

Following on his impressive results from last week, Thing 1 (The Greek) remains undefeated.? Thing 1 successfully picked the Giants to beat the Cowboys.? The game was higher scoring than he expected, but the end result was pretty close with the Giants winning 31-24.

Stay tuned later in the week when The Greek tries to keep the streak alive, and The Swami (Thing 2) tries to re-establish his credibility.? The Swami is spending a lot of time this week trying to memorize songs for his preschool’s winter show.? So his football picks may suffer.? We’ll wait and see.

Thing 1 (The Greek) and Thing 2 (The Swami) have made their predictions for Week 13’s Game of the Week – New York Giants vs Dallas Cowboys.

Thing 2 expects a different kind of game. He predicts a high scoring contest with Dallas wining 55-30. At first he said the Cowboys would score 88 points. But after discussion with Thing 1, and careful consideration, he changed his pick to 55 points. As you can see, he likes when both numbers are the same. And the highest number he knows is 100.

As a lifelong Giants fan, Thing 2’s pick causes me great pain. But there is still hope to convert him. Thing 2 has been known to quickly change team allegiances based on the outcome of a game. He only likes to root for the winner.

Thing 2 looks up to his big brother and copies whatever he does. So it isn’t too surprising that he has been studying under the tutelage of the sports master, otherwise known as Thing 1. Whatever sports information Thing 1 spews, Thing 2 absorbs it.

Sometimes the information source is faulty. For example, I heard Thing 1 tell him the Cowboys are 7-3 but they are really 8-3. A small discrepancy.

Sometimes Thing 2, in his imaginative 4 year old way, creates his own information. On Monday, he was going around saying the Redskins were playing the Bills on Monday Night Football. In fact, Monday’s game was between the Saints and the Patriots. He has also said that Jason Campbell, the quarterback for the Redskins, can run as fast as a cheetah.

Before Monday night’s game, I had Thing 1 (aka The Greek) and Thing 2 (aka The Swami) make their predictions for the outcome.

Not only did they both pick the correct winner (something SuburbanDaddy and SuburbanUncle, two self-professed sports experts could not do), but the scores they predicted showed a keen knowledge of New Orlean’s high powered offense.

I need to test if this was a fluke, or if there is some innate talent at work. So expect to see score predictions here each week from The Greek and The Swami. Be sure to check back in a few days for this week’s featured game: Giants vs Cowboys

In the spirit of Thanksgiving football, here is a recent game of pillow football between Thing 1 and Thing 2. The game is played by charging your opponent with a pillow and attempting to knock them down. It isn’t very complicated. Usually the game ends when someone gets hurt and cries.

While the game is going on, Thing 3 plays his own game of try to touch the video camera.

If two times establishes a tradition, then we have a new Halloween tradition. Plenty of people go to pumpkin patches, carve jack-o-lanterns, and decorate the house for Halloween.

Thing 2 started his tradition last year of handing out candy with no pants on. Well, this year it happened again. We didn’t plan it. Didn’t ask for it. But, whoomp there it is!

Of course, I was close by with the video camera so you can see for yourself.

Thing 2 is lucky to have a big brother who is, at least to him, THE authority on everything. Any questions about any topic and Thing 1 will have an answer. At least half the time his information is correct.

In this case he was so right, proving kids pick up way more than we think.

Thing 1: It’s when you play with a friend at their house or at your house. And the mommies drink wine.

Spider Bat came back to help protect us from bad guys. And this time he was joined by his partner Super Spider. 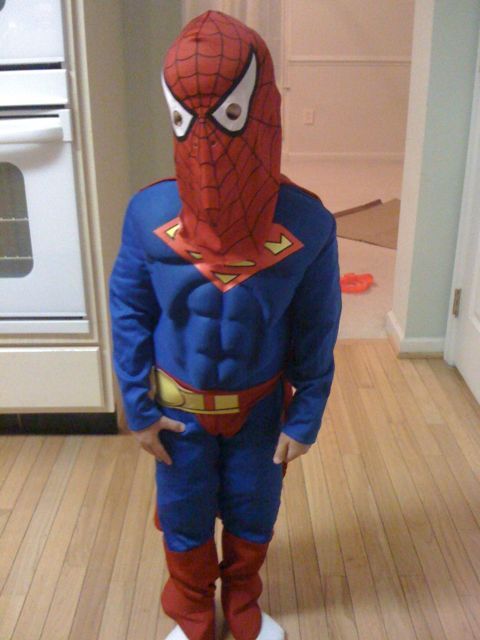 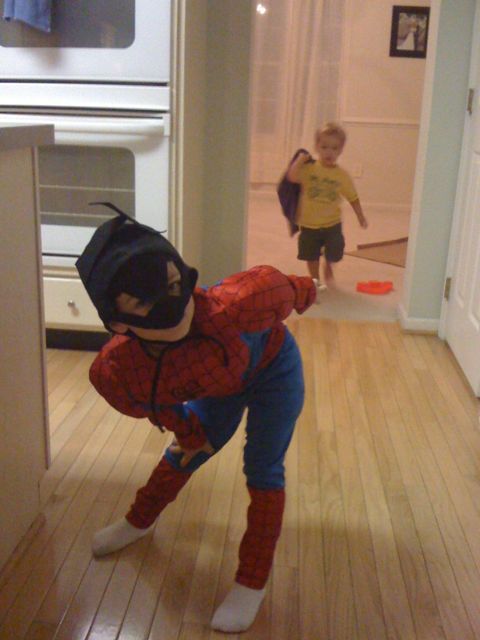