Based on a certain recent history example , it would be unwise to declare anything “Mission Accomplished”. But I’m about to do it anyway.

But I think we can say we’ve closed the book on that milestone. Thing 1 hasn’t had an accident in at least a month. (He still wears a pull-up to bed, but I think that’s a developmental thing he can’t help). He actually tells us when he needs to go, or, even better, just goes on his own.

I thought this day would never come. I know, I may have just put a major jinx on it, but I don’t care. Mission Accomplished!

The big weekend didn’t go as well as we had hoped. The rest of the weekend went pretty much like the early update. We had some mild, bribery induced successes.? But there were also many, many accidents. To the point where Thing 2 actually asked to wear a diaper on Sunday. I was proud of his effort, he was trying very hard, but I could see his frustration.

We gave the teachers at daycare the green light to continue today, too. He normally does much better there when he goes along with his friends as a group.

I’m about to leave work, on my way to pickup at daycare. I’m not very cautiously optimistic.

10:30am: Another potty success. Another Oreo. 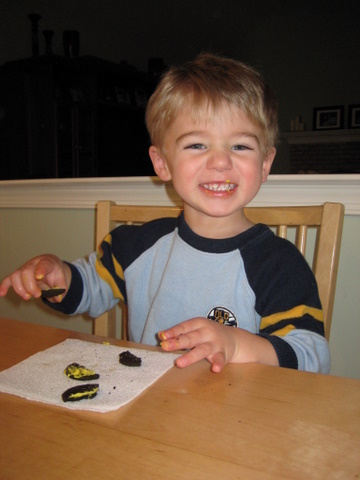 First update on the big weekend. Thing 2 was very excited to be wearing big boy underwear. He picked Thomas The Train. He was even more excited when he saw the bag of Oreos. He gets one every time he goes potty.

The Oreos were an instant success. He went pee pee in the potty! Everyone is happy.

Thirty minutes later, a setback. Thomas The Train is full of poop. I clean Thing 2 up and next up is Elmo. I think Thing 2 thinks there is an endless supply of underwear, like diapers, and after an accident he gets to pick a new pair.

Hmm. Maybe I need to rethink the strategy. We’ll stick with it for the rest of the day.

I’ve written a lot about the difficulties we’ve had with Thing 1 and potty training.? I guess it’s to be expected since he’s our first one and we learn as we go.? It’s what experts call the “guinea pig syndrome”.

We have tried very hard not to push Thing 2 to use the potty until he is ready.? He actually started going potty some time ago.? At preschool, he goes all the time, and his diaper is rarely wet.? At home, he almost always refuses to go.? But we don’t push him.

Now, his teacher is saying he is ready.? We’ve thought so, too, for a while now, but were reluctant.? So we’ve decided this weekend will be the big switch over.? We’ll get out the big boy underwear and make a big deal.

The way I see it, this can go one of two ways.? Either he embraces the potty and never looks back (I’ve heard legends of this happening), or we crash and burn, and we’re in for a rough weekend.? If that’s the case, at least I’ll have plenty of entertaining blog material for Monday.