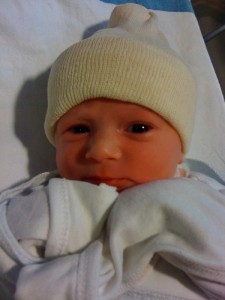 For those of you who have been following SuburbanDaddy for awhile, I’d like to introduce the newest addition, Thing 4! I’m not sure which is bigger news – that there is a Thing 4, or that Thing 4 is a girl.

I’m happy that with three older brothers she will be very well protected in her teenage dating years. Forget about the nerves a teenage boy will feel having to face questions from her dad, SuburbanDaddy, for the first time. How about the gauntlet he will face going through Thing 1, Thing 2, and Thing 3.

Thing 3 already needs to be restrained if you try to take away his milk or Buzz Lightyear toy. Image what he’ll do if you make his little sister upset. Of course, with three older brothers, she will probably be pretty tough herself.

Over the next few months, I look forward to sleepless nights, spit ups, and lugging around baby gear. I also look forward to a whole new set of material that I can write about here. That’s the real reason we added a Thing 4.

Because I have so much free time, I’ve taken on a new web project. It’s one of the reasons blog entries have been sparse the last few months. It’s called Kidburst and the idea is to help parents find local activities for their kids. Right now we’re mainly in Northern Virginia but hoping to expand to other places (maybe with your help). Check it out and let me know what you think.

Thing 3 turned two years old today!? The day began with him sleeping in until 7:15, which was the best birthday gift to SuburbanMommy and Daddy we could have asked for.

After that, it was a day filled with fun and celebrations tantrums and time-outs.? At two years old, his brothers were more excited about the prospects of a birthday.? We didn’t plan a party because we’re having a combined Thing 2 / Thing 3 birthday party next week.? Well, it’s really Thing 2’s party and Thing 3 gets to be there.? He doesn’t know the difference at his age.

I wish I could say, based on his behavior today, that today was the beginning of the terrible two’s.? Technically, they start today because he is now that age.? But, in fact, he has been in the terrible two’s since he was 9 months old.

After a day of seemingly non-stop tantrums (some mine), we had a makeshift party with a few cupcakes.? These pictures say it all.

This is when we presented the cupcake with a candle, and sang happy birthday.? He was not the least bit interested.? Actually, he was mad because we paused the Backyardigans on the TV. 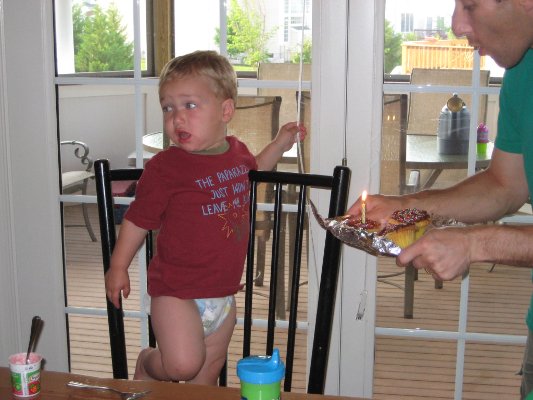 This is the scene after blowing out the candle. You can’t see it here but he was having a tantrum in the next room.?? Have you ever seen a kid run away from a chocolate frosted cupcake?? Not to worry about wasted food, SuburbanDaddy will be eating his cupcake later. 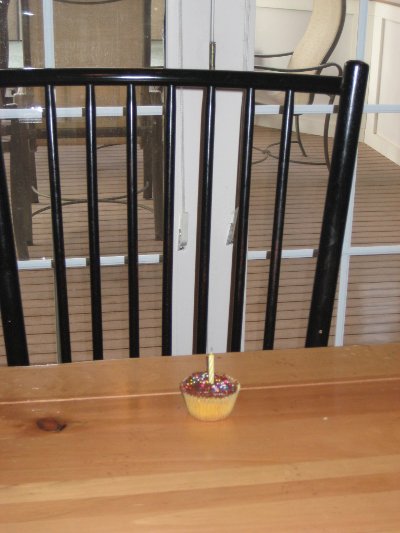 Now here are a couple of birthday professionals.? Thing 1 and Thing 2 had no problem picking up the slack.? Maybe Thing 3 will get the hang of it next year. 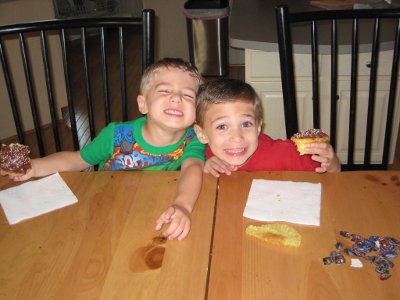 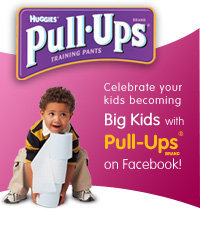 In the typically unglamorous world of SuburbanDaddy, I have achieved a certain measure of celebrity.? SuburbanDaddy is now a recognized Potty Training Expert, doling out advice to parents on the Pull-Ups Facebook page!? And yes, this is not a joke.? Who knows what big and bright future awaits?

Show your support of SuburbanDaddy and become a Pull-Ups fan today!

We don’t need to wait until Tuesday. The results are in: Obama wins. How do we know?? Because each of the last 7 presidential races * (see footnote) could be predicted by the relative sales of each candidate’s mask. 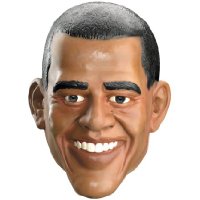 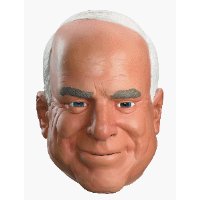 Footnote: I have no evidence to back this up