Thing 3 began his soccer career this week in the Under 5 division of Loudoun Soccer known as Mini-Soccer. It’s his first experience playing organized sports although he has watched his brothers play soccer and baseball many times.

The 45 minute sessions consist of half drill time where everyone gets to practice with their own ball, and the second half there is a “game” with two sides all chasing the same ball. At the end the team gets snacks which is the highlight of their day. ?See if you can pick out Thing 3 in this photo. 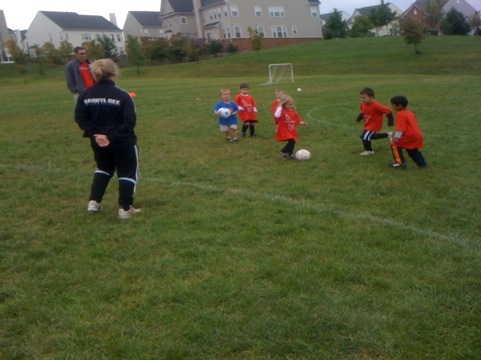 Here’s a clue: ?There is only one kid NOT wearing the team’s red shirt that was handed out at the start of the game. ?Yes, that would be Thing 3. ?Picking the shirt he wears each day is a painful process that only he can decide. ?Do you really think he’ll put on a different shirt just because all the other kids do it? ?Please. ?I suppose being a non-conformist is a good thing.

You’ll also notice all the other kids are chasing a single ball except Thing 3 who is carrying his own ball in his hands. ?Why would he do that? ?Well, he didn’t like the part about sharing and taking turns with the ball. ?And he got really, really mad when one of the defenders kicked his ball. ?So he decided to hold onto his ball just in case someone else tried to kick it.

After storming off the field and threatening to walk to the playground, he decided he would conform to these perceived arbitrary rules and join the game. ?Except in true Thing 3 fashion, he would rather?sabotage it for everyone else if he can’t do it his way. ?So?he set out to be the one who gets the ball. ?I have to say he was quite good when he set his mind to it. ?A result no doubt from having two older brothers. ?He would steamroll through the other kids and fight his way to the ball, and came out from the pack to break away with the ball on several occasions. ?Except his purpose was not to get the ball in the goal. ?Instead, he kicked the ball as far out of bounds as possible to stop the game so the other kids wouldn’t be able to play. ?All because he couldn’t play with his own ball.

I’m glad I have this blog so we can look back here in 10 years, when he is a star soccer player, to see how he got his start. ?I’m not getting discouraged by this first experience. ?I just found Thing 1’s first time playing organized sports which also did not go so well, but now he can’t get enough team sports.