I decided to give Powermat a try. ?Disclosure: I was offered the product to review. ?Powermat’s tag line is Lose The Cords and promises to end constant plugging and unplugging and the mess of cords. ?Sounds good to me. ?Sign me up.

Powermat has a bunch of different products. ?A home/office flagship model, a travel version that folds up, and charging mats that?accommodate?1, 2, or 3 devices. ?Then there are various cases and adapters for iPhone, Blackberry, iPod, Nintendo DS, and so on. ?There is an adapter for most of the popular mobile devices. ?Although my work Blackberry 8830 isn’t supported.

All the different models work the same way. ?A sleek looking mat on which you place your mobile device to charge. ?The charging works wirelessly and there are high tech features like magnetic alignment, RFID, audio confirmation, and charging indicators.

It was easy enough to set up but I was surprised at how many pieces were involved. ?There is the mat which has a single power cord. ?OK, I expected there would still be one wire. ?Then you put a 2×2 inch square receiver in contact with the mat and it?wirelessly?passes charge from the mat to the receiver to your mobile device. Except here’s the catch: You have to plug your device into the receiver with a cord! ?I thought cords would be gone?

There are some adapter options, sold as extras, which give a sort of cordless solution. ?There is an iPhone case you can use that has the receiver built in so you don’t need a cord, but the case is rather bulky compared to the case I have on the phone today. ?Another adapter acts like a docking station with a stand to stick your iPhone in. Technically, not a cord, but you still need to plug it in. ?Not exactly end constant plugging and unplugging. Considering the regular charger that comes with iPhones is pretty slim anyway, Powermat is not a huge improvement. ?As far as the travel model is concerned, it seems like it would be easier to just take the regular iPhone charger with me rather than the travel mat + receiver which I’d still need to plug into the phone.

Once set up it does a fine job charging the phones. ?That is, other than the one night it woke me up with an annoying beeping sound at 3am. ?Even if it doesn’t totally eliminate cords, it does look cooler and neater that the tangle of cords we used to have, so we’ll keep using it at home. Here’s what the top of our microwave looks like now with the Powermat. 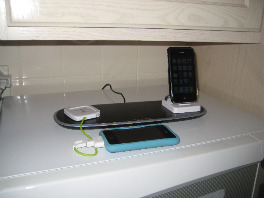