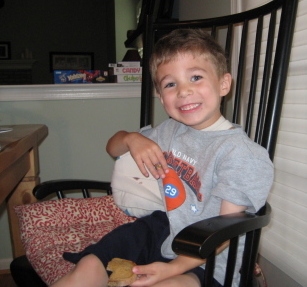 Thing 1 had surgery six days ago. He was born with a hemangioma on his shoulder. It started as a little red dot, and eventually grew to several inches in diameter. It used to look like he was wearing a shoulder pad on one side, but it became flatter over time.

We’ve always known he would eventually have surgery to remove it. The doctors suggested we wait until just before school age, when he’s still young enough not to remember it, but old enough to allow the lesion to recede somewhat on its own. After school age, he might become self conscience about it. Up until now, it bothered us more than him.

The surgery was at Children’s National Medical Center, at an outpatient location. I’m sure to the doctors this was considered a “routine” procedure. But, to the parents, any surgery which requires general anesthesia is far from routine.

When we got there, Thing 1 put on his little hospital gown and waited patiently with us for the doctor, who was running an hour late. He was quiet and a little clingy, but pretty good considering. We walked with him to the operating room and stayed with him as he put the anesthesia mask on and fell asleep.

The surgery took about an hour and when the doctor came to see us, he said there was good and bad news. What? Gulp! Surgeons aren’t known for their bedside manner. The good news was that the surgery went well and they removed 98% of the hemangioma. The bad news was that they had to put his arm in an awkward position, and it would have to remain in that position for at least a week.

We joined him in the recovery room, before the anesthesia wore off, so we’d be there when he woke up. I was ready to provide strong comfort to my son as he woke up. That is, until I saw the blood soaked bandage and started to feel, uh, woozy. The nurses had me lay down and drink the little apple juice containers they usually give to the kids. So, when Thing 1 woke up, all he saw was SuburbanMommy by his side, giving comfort to the two of us.

This sort of thing had never happened to me before. I was in the delivery room for all three of my kids. I saw the full blood and guts joy of childbirth. I eagerly cut their umbilical cords! But, here I was on the verge of passing out and/or throwing up. In my defense, I hadn’t eaten or drank much that day because all they had was vending machine s which required exact change, and the only 65 cents we had SuburbanMommy used to get a Diet Coke.

We are now six days post surgery. Thing 1 has been a model patient. He keeps his right arm propped 24 hours a day (see picture). He never complains. He does everything we ask. It probably helps that we suspended all of his “rules”. He can stay up as late and eat whatever he wants. He got a bunch of new art supplies and games, and hasn’t had this much one on one time with mommy and daddy since his brothers arrived.

4 thoughts on “Kids Are The Best Patients”