Some time ago I wrote about Thing 2’s toddler comfort objects. At that time, it was all about Mustache Guy. Now, we have entered into the dragon phase.

After completing his first potty chart, Thing 2 picked out the big dragon. Last weekend, after his first successful poop in the potty (a big deal in our house!), he picked out the two headed dragon with fire coming out of one head. 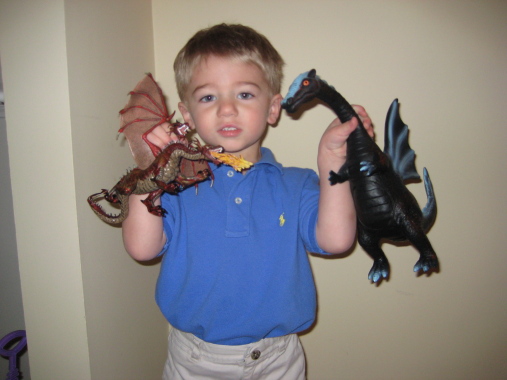 So, naturally, the new dragon (with the fire) accompanied Thing 2 to preschool Monday morning. He started showing it to all his teachers and friends. Then we had a little problem.

SuburbanMommy dropped Thing 2 off in his classroom, dragon in hand. Then she took the other two to their rooms before checking back in on Thing 2. When she returned, she found Thing 2 in the corner with dragon, tears streaming down his face, but not crying.

The teacher explained that one of the girls in the class was a little frightened by the new dragon. Especially when Thing 2 did his ROOAAR! in her face. She started crying. And she actually peed in her pants.

When SuburbanMommy saw Thing 2 in the corner she thought he was getting a time out, and that was why he was crying silently. But the teacher explained that he was spending a last minute with his dragon before he had to put him away for the day. He was saying an emotional goodbye to dragon. 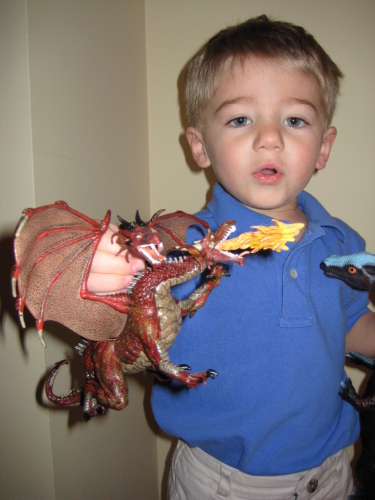 3 thoughts on “Enter The Dragon”